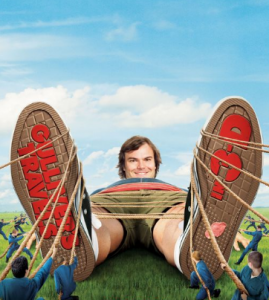 Lemuel Gulliver is a nice guy but needs to take charge of his life. One day a new employee that starts work as an underling gets a promotion. This makes Gulliver finally try to get out of his comfort zone and take a risk to get ahead and maybe find his dream girl. He sets out to travel to the most dangerous place he can think of: the Bermuda Triangle.

A Big Adventure in a Little World.

As the legends say and fate confirms, Gulliver finds himself in the middle of a hurricane and is transported to the island of Lilliput and wakes up tied down in chains and is a prisoner of people no bigger than the length of his hand. With such little people, comes little houses that seem like doll houses to Gulliver. Even their great palace is not as high as his waist, which makes the citizens fear Gulliver as a great beast.

At first, Gulliver is put to work in the fields because, by comparison to the people of Lilliput, he has god-like strength and can do manual labourat a miniature farm with ease. Suddenly an attack occurs and Gulliver takes it upon himself and to selflessly defend his captors and as expected, against such small people, he is victorious.

A Hero in the Land

Gulliver is welcomed in Lilliput as a hero, a giant, and their great protector. His chains are struck and a feast is made in his honour. Gulliver now starts living a life of comfort; his new friends start building him a dream home, which, despite their small stature, they accomplish due to their large numbers. He begins a life of luxury and comfort as his miniature friends can replicate all his favourite movies and video games to his liking.

However, treachery is afoot as Gulliver becomes loved by the Lilliputians more than a vain general who wants the princess who loves another. Gulliver is all in favour of the princess loving another and not the general. This makes the general angry and very quickly starts to sully Gulliver’s reputation and eventually comes to the point of a duel with Gulliver. The general makes use of a gigantic suit of armour to fight Gulliver and despite the general’s best efforts, Gulliver emerges as the champion.

This is a fantastic adventure of humour and love and a brilliant film adaptation of the book with heroics that will leave you reeling with laughter and on the edge of your seat. While not quite true to the book, the context is the same and Jack Black’s acting makes this truly a family film that will have everyone enjoying themselves and leave them smiling.